I guess Omaha rush hour starts at 5 AM. At 5:30 I was grumpily awakened by the highway traffic zipping by my window. As usual, the sunrise—this time behind angry storm clouds—was phenomenal. It’s almost enough to make me want to see the sunrise every morning. I said almost!

I drove south into Omaha and cut over to I-29, which would take me down to the Kansas City area, from which I would turn east towards Pattonsburg.

South of town were signs that I-29 South was closed ahead. Okay, guess there’s a detour. I took the exit where indicated, left I-29 behind, and in the drizzling rain proceeded east along with the rest of the traffic.

THIS was the detour. 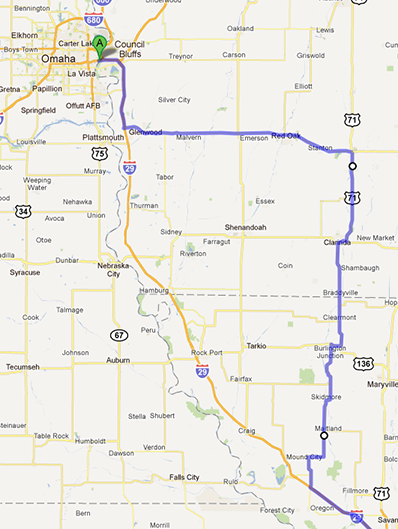 It was the mother of all detours. I drove so far into the butt end of Iowa that I started looking for Shoeless Joe Jackson. At one point I had the insight to ask my anthropomorphized iPhone to recalculate directions. It blinked and said “You’re WHERE? …Uh, yeah, don’t even bother with the Interstate at this point, dude. Country roads the whole way down from here.”

It was an opportunity to see more of the backwoods Midwest, for sure. I passed through one tiny town after another, rain coming and going the whole way. About 9 AM I was driving at high speed past the town of Villisca, when… 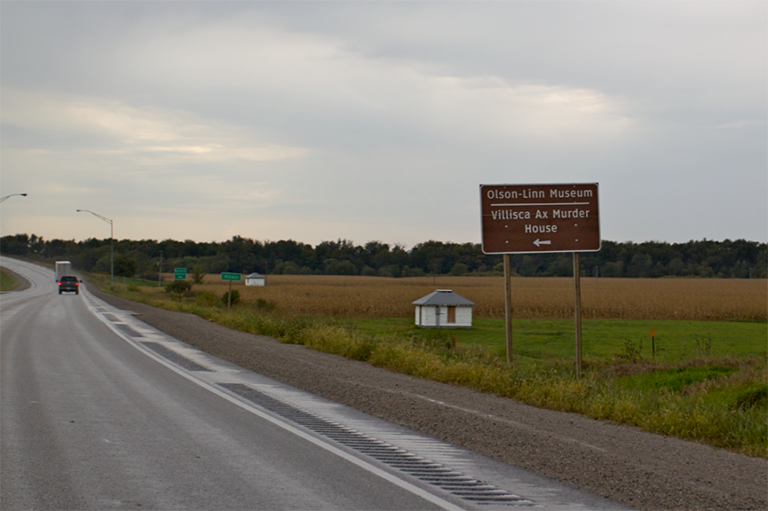 I slammed on the brakes.

Alas, though there’s a cool-looking museum on the town square and advertised tours of the Ax Murder House itself, they didn’t open until 1 pm. Wasn’t worth the long wait, though it took me a couple of agonizing minutes to realize this. So all I know of the Villisca Ax Murders, sadly, I got from Google.

I passed into Missouri, criss-crossing the countryside. Fuzzy black caterpillars were crossing the road here by the thousands in some kind of autumn migration (I tried not to hit any). Finally, right near good old I-35, I entered the town of Pattonsburg.

Okay so here’s the deal. In 1993, the Missouri River experienced some of the worst floods in its history. And in 1994, as part of a church mission trip, I went with my youth group to rebuild the hardest-hit towns. My group’s assignment: Pattonsburg.

For some reason the trip has always stuck in my memory. I spent my 16th birthday there, sleeping on the floor of the Methodist church. We tore up floors and repaired roofs. We ran mischievously through corn fields. We ate at the only diner in town. We nicknamed the site leader “Butt Cheese” and TP’d his van. (We didn’t like him.)

I’ve thought of that town many times since, and realized that some day I wanted to drive through it again. With two extra days to burn, why not? So I took my nine-hour detour from Pierre, SD (with an additional two-hour detour thanks to I-29) just to find this tiny, tiny place. 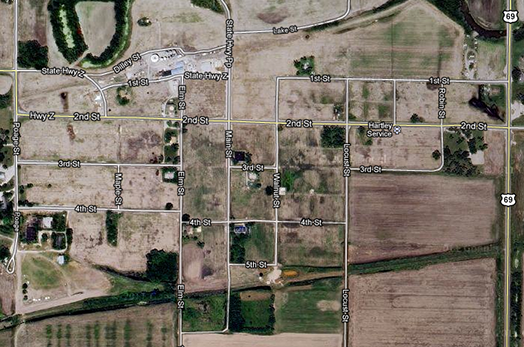 Not long after we were there, the Pattonsburgians had the wild idea to move the ENTIRE CITY to higher ground (it had flooded 33 times in the preceding 100 years). So my first stop on Tuesday morning was New Pattonsburg, which the sole person in the small Municipal Building proudly declared is the “youngest city in America.” There were brand-new churches, a strip-mall looking main street, and a pretty interesting-looking K-12 school that was a series of windowless geodesic domes with skylights at their center and inward-facing classrooms. Never mind, I’d need to draw you a picture.

Based on directions from the lady at city hall, I drove five miles down the side highway, and turned right into the town of Old Pattonsburg. Like you can see above, the streets are still there, but the buildings are almost entirely razed—there’s twenty at most still standing, half that number in actual use. 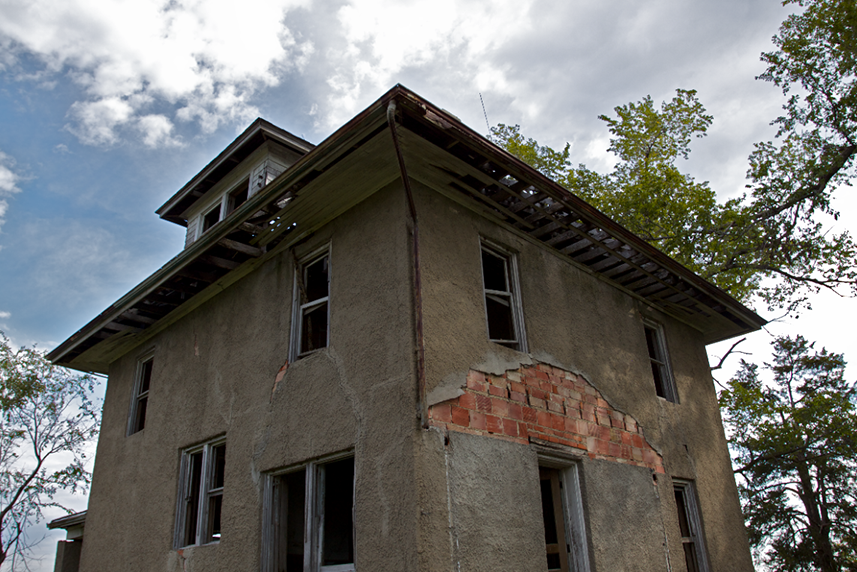 I drove to the end of the “main street.” Suddenly a flashback: against all odds, I recognized one of the few remaining houses as one of the two that I’d worked on 17 years ago. I guess my floor-building skills are JUST THAT GOOD, y’all.

City Hall Lady had told me the Methodist church was still standing, though she described it as “overgrown.” I thought she was mistaken—there was one church, but it wasn’t the one we’d stayed at. I prowled the empty blocks for a couple of minutes. I rolled slowly past a stand of trees. Then suddenly I saw it:

The stand of trees was concealing the Methodist church almost perfectly, but it was still there. I parked and walked through the open door, noting the unbroken glass, and found myself in the abandoned sanctuary. 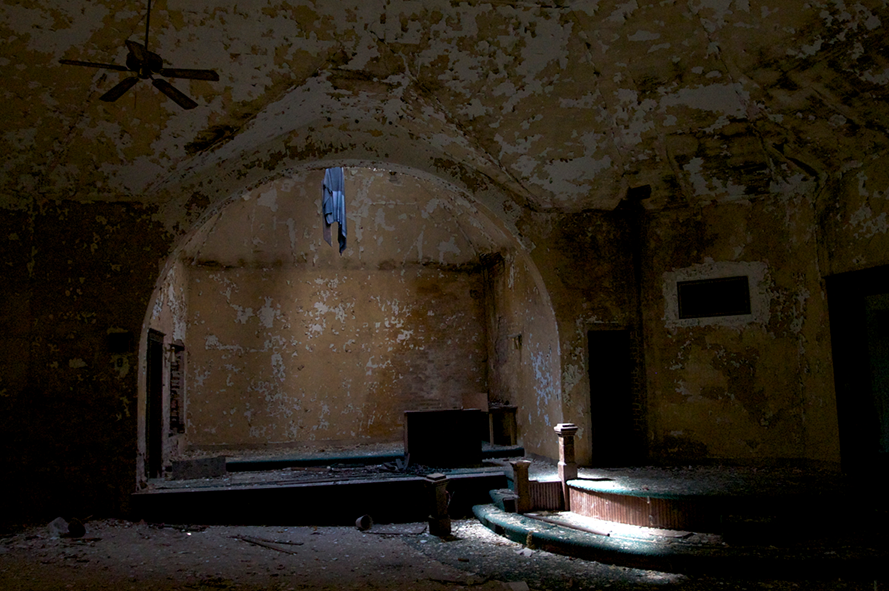 My friends know well that I’m a serious nostalgia addict. And I’ve established that I love prowling abandoned buildings, the spookier the better. So for Kevin this particular moment was, like, the best thing since sliced peaches.

I explored every corner of the small, small church. There was a basement that I’d learned to play pool in, but it was down a black staircase; no matter! I got the headlamp from my camping gear and walked fearlessly down. Are you kidding me? The pool table was still there. 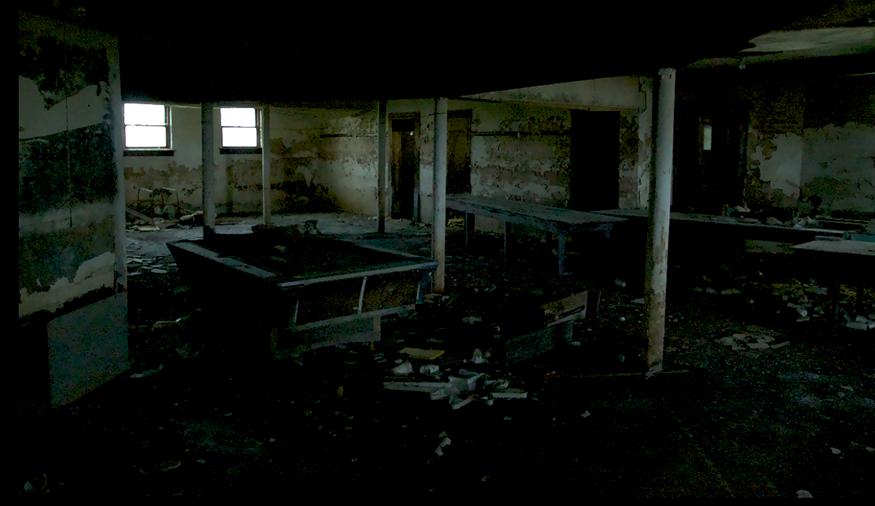 The place had been deserted hurriedly, and apparently never ransacked like you tend to expect of abandoned buildings. There were long stacks of styrofoam cups in the kitchen, for some reason a repository of school textbooks and other materials in the classroom area. 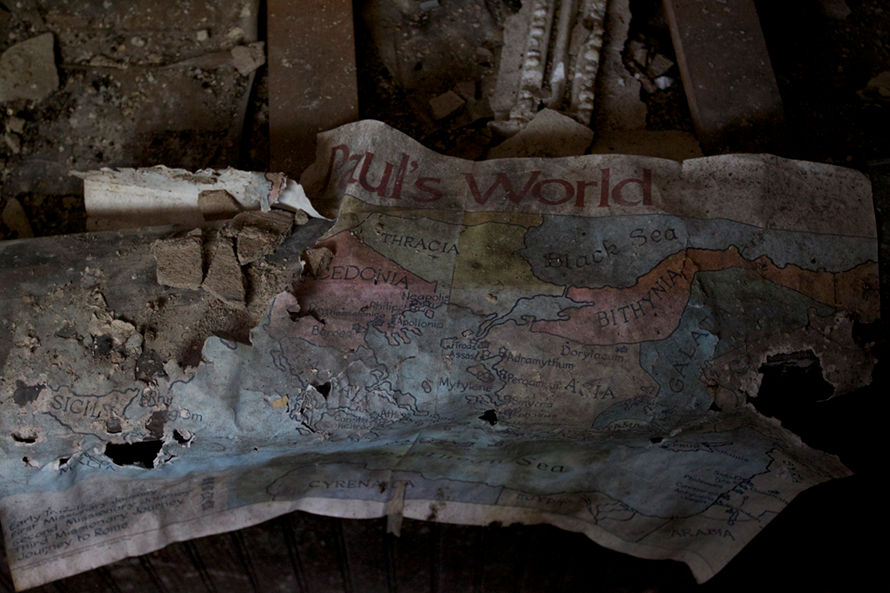 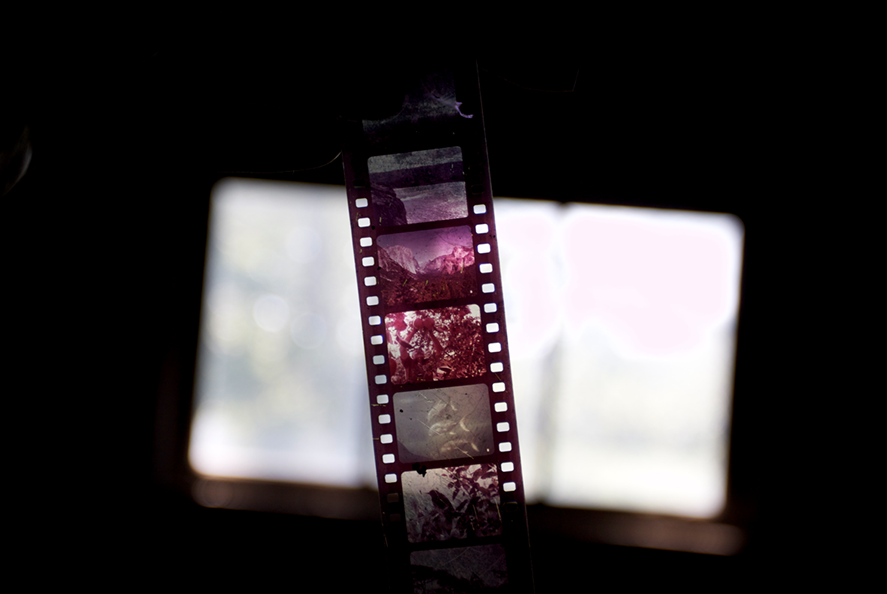 I got my fill of pictures and memories, remembering how we’d explored these same spaces, finding the spot on the sanctuary floor where I’d woken the morning of my 16th birthday to see a giant card everyone had signed for me. I had that card as recently as a few years ago—hell, I might STILL have it.

I wanted to hug the entire place, to put it in the trunk and drive it home to Texas so I could walk everyone through it like it was a museum. But alas, it had to stay here, in this town that none of you will ever visit—this town that doesn’t even EXIST any more. So I left.

On my way out I got a picture of the church, just to show how invisible it is to the outside world.

I drove down I-35 to Kansas City. Once there I found a place to rotate my tires. How long is this road trip? I HAD TO ROTATE MY TIRES WHILE I WAS ON IT. I called my sister and told her excitedly all about Pattonsburg.

So long as I was in the area, I stopped for the afternoon in Lawrence Kansas, home of KU (Rock Chalk! Not a fan, it’s just fun to say). My high-school girlfriend moved to Lawrence and then went to KU, so I had some vague memories of it being an awesome little town. I was right. I walked up and down a single block of Massachusetts Street, where I found used-music stores, a bookshop, a chill little coffeeshop, and the best burger of the entire trip: medium-rare with bacon, smoked gouda cheese and chipotle-cocoa ketchup for God’s sake. Truffle fries on the side, and a Guinness. Sorry, In-N-Out, you just got out-Whataburgered.

I was enjoying my time in Lawrence and would have been happy to spend the whole night there. But it was early yet for any of the dive bars to be hopping, and I had nothing else to do, so I said goodbye to this badass college town and moved on to Emporia.

One last wild-goose chase, this one even more ridiculous. On that same mission trip, as we drove north from DFW, our church youth group stopped for the night at a very small college somewhere in Kansas. I clearly remember the administration building, the layout of the dorm where we stayed, and (clearest of all) the baby bat that I was tasked with throwing out the window when we found it flopping helplessly down the hallway floor in the middle of the night. There’s a whole story.

Emporia State University, enrollment 6,314, was my best guess. I stopped off at the campus and it looked damn close to the place we’d stayed, but not quite. I even got out of my car and wandered the campus for a bit (I’ve always found college campuses relaxing to walk around), and found a couple of buildings that were frustratingly close in appearance to what I was seeking out. But unless the campus was totally reconfigured in the last 17 years, I was barking up the wrong tree. This particularly obscure wild goose remains uncaught.

Did you read this whole long blogpost? Then I must reward you! RANDOM PICTURE OF CHIPMUNK:

One thought on “Day 17: Life After People”