The end of my crazy Rescue 911 day was remarkably mundane: watching “Black Mirror” in the back of my camper while sipping hot chocolate with a wee nip of whiskey. For the final time, I went through my settling-in routine: suitcases shoved to one side, couch folded down to a bed, curtains drawn, dish cloth draped over the skylight, myself zipped into the sleeping bag, heater turned off. The next morning, everything in reverse order.

My neck and back were in open rebellion after 10 nights in Björk. But I had good news for them: after folding my giant paper map of Iceland every which way, I had finally come back around to the quadrant that included Reykjavik. The end was, at least on paper, in sight.

But we don’t head in a straight line to the end point, my friends. Not even—ESPECIALLY not—when we’ve survived a Snowstorm Rescue the day before.

And so, instead of driving south from Borgarnes to Reykjavik, I turned east on highway 50.

If Bob Ross had been my road trip companion, he would have thankfully reloaded his color palette at this point—deep browns, greens, reds, and yellows, with black and white needed only for the mountains in the distance. 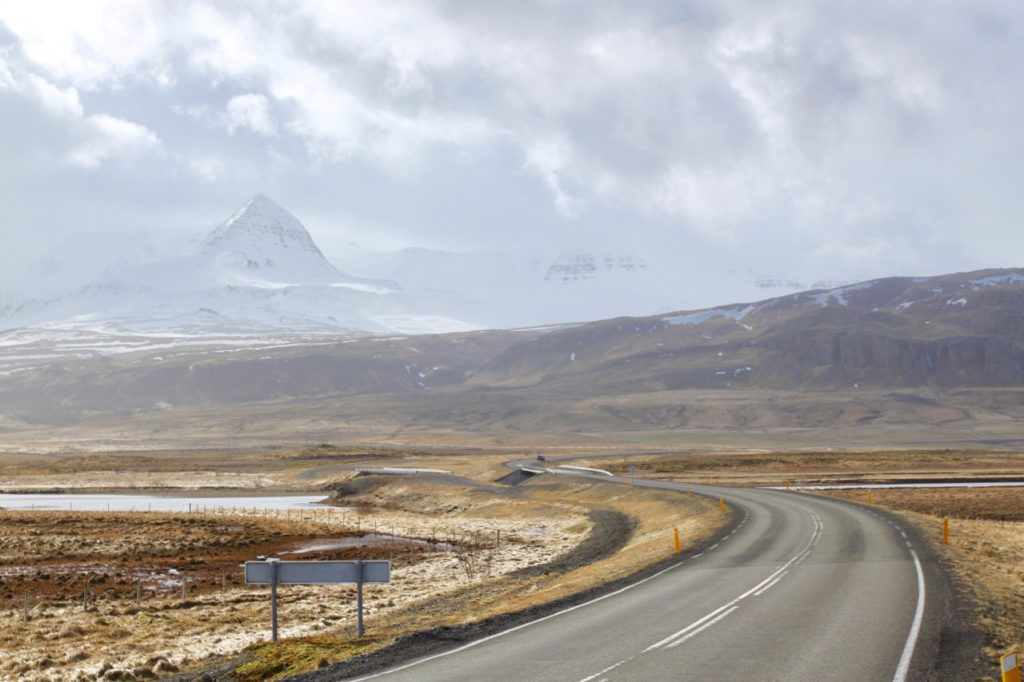 The valley was broad and flat, and river meandered through it in senseless cursive loops. I might have been in Missouri, if the plumes of white in the distance had been brush fires, rather than steam emerging from underground.

I arrived at the viewing area for two adjacent waterfalls. At Barnafossar, the river funnels through a jagged channel of lava rock that’s only about 1200 years old. The churning water is so violent that it could pass for milk. 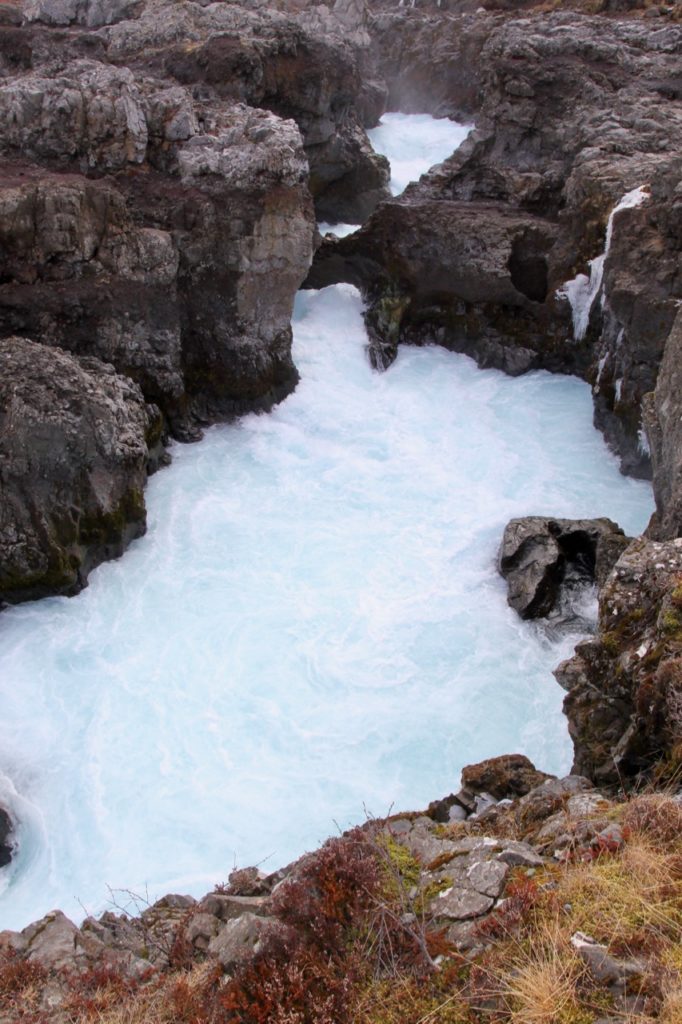 Just a bit farther down, Hraunfossar pours water into the right bank of the river for almost a kilometer. 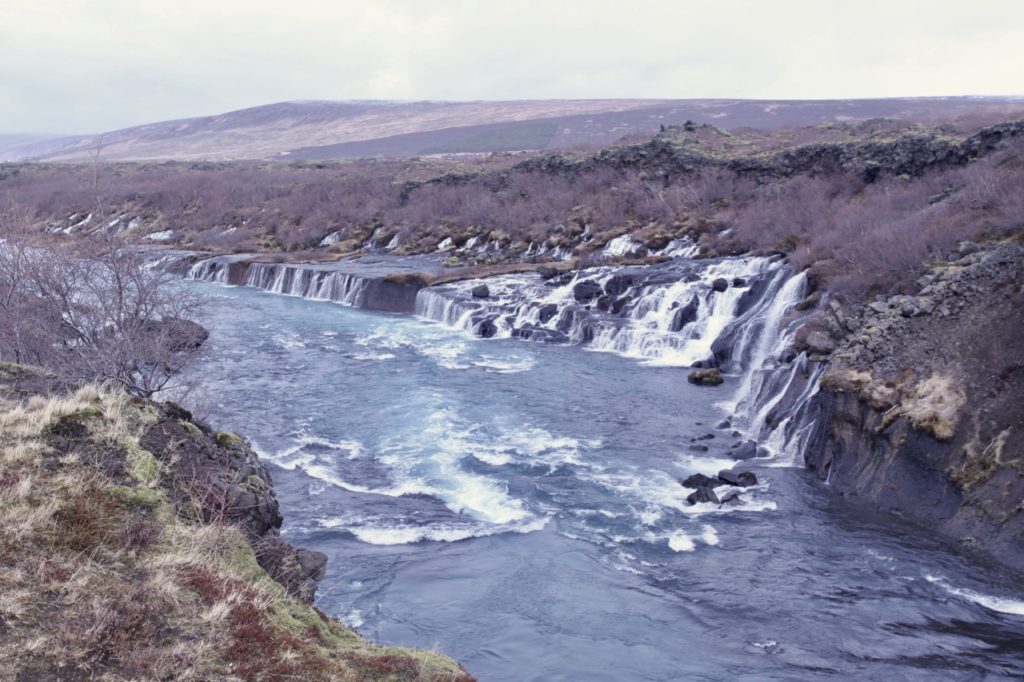 For not-the-first time on this trip, I was frustrated with how pictures fail to capture the sights in person. Some of this stuff you just need to be there for.

Björk’s check-engine light had been lit since I first picked her up ten days prior. (“It’s just the emissions,” said the employee cheerily.) Now, though, the light had begun to blink and the engine had noticeably lost power. I called the Happy Campers service line, and since I was so close, they told me to just bring it on in to Reykjavik. I rubbed the narwhalrus for luck and we continued south.

I was in a rush to return the camper by 4pm. Even so, I took one last sightseeing stop to Glymurfoss, Iceland’s tallest waterfall1 just a bit north of Reykjavik. It was a bit of a bust to see the falls themselves; the best viewpoint is from the opposite side of the river, and the only way to get across (dry) is on a log bridge that’s only open in the summer. But the hike out and back was super-fun, requiring a climb down through a cave tunnel and up a steep muddy slope. And the ravine itself was impressive on its own. 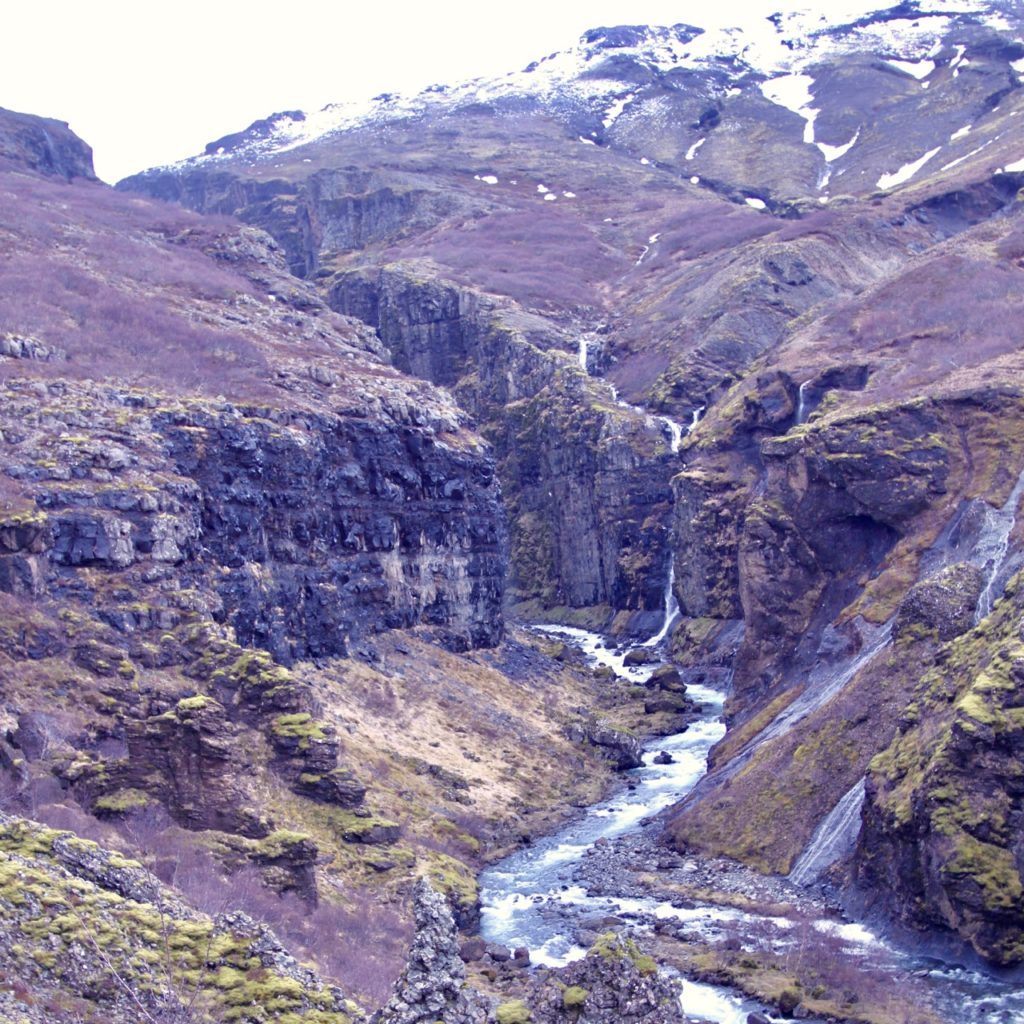 Back to the car. Time for the real, actual, home stretch.

I drove back up the south side of the valley, along the base of a long dark slope with streaks of green moss and white snow straining to meet each other in the middle. Signs of civilization began reappearing: semi trucks, overpasses, four-lane roads, police cars, even a Toys R Us. Björk and I limped back to port, check-engine light flashing urgently the whole way.

Happy Campers is located near the airport, so to get back to town I took the airport shuttle again, almost like I was rebooting my trip. The landscape drifted by once more outside the window. It was so strange and new when I first arrived. It’s still strange, but now I know it well.

I had a beer at the hotel bar and a yummy noodle bowl from a place around the corner. I retreated to my room, drank whiskey, watched BBC, and otherwise did as little as possible. I slept in a bed. Like a rock.