After taking a six-hour-long shower, gorging myself on the free breakfast, and bidding a teary goodbye to the comfortable bed1, I checked out of the Hotel Kea and drove Björk northward through Akureyi. Along the way I saw something I hadn’t seen since all the way back at Reykjavik: stoplights. As an adorable bonus, all of the red lights were heart-shaped.

The snowbound peril began again almost immediately as I left the city and headed up the western side of the fjord. Thank gawd for my studded winter tires.2 For the third time in three days, the road disappeared entirely in snow; I was traversing a steep slope that angled down to the sea, cautiously rolling along a flat strip halfway up the mountain. Then a van came at me from the other direction, towing a large boat. I made an audible Tina noise.

At the top of the peninsula was a series of long tunnels which were pretty creepy themselves, despite offering a break from the snow. They felt like cheap tunnel rides at Six Flags. Most were a single lane wide, with a gap every 500 meters for one car to pull over and let the oncoming car past. The longest tunnel was 11 kilometers long, with only a tiny gap of daylight in the middle.

It was here, on a long straight stretch, that a bright red light suddenly flashed at me from the side of the tunnel. …Guys, I think I got camera-speed-trapped. This would be (a) frustrating, since I was driving at Miss-Daisy speeds for 99% of the day; (b) scary, because omg how expensive are Icelandic speeding tickets; and (c) interesting, because they were pretty much the first sign of law enforcement I’ve seen in all of Iceland. I haven’t noticed a single police car, not even outside a police station.

I exited the final tunnel just past the town of Siglufjorður and rounded a bend. To my right was the Arctic Ocean, uninterrupted. Nothing but water and ice between myself and the North Pole. I looked it up later: the latitude was 66.2° N, easily the farthest north I’ve ever been. It felt like the end of the earth.

After rejoining the Ring Road, I stopped at a gas station and had a very different kind of Treat Yoself experience: a hot dog3, an ice cream cone, and a coffee. Final tally for this calorie-fest was somewhere around $15. Way cheaper than dinner last night, unless indigestion is a factor.

I peeled away from the Ring Road yet again to head north into the Westfjords, Iceland’s wildest and least populated region. To my complete lack of surprise, a long portion of the road there—the ONLY road there, I want to emphasize—was unpaved. By now, I’m over it.

Me when I drove on my first bumpy, potholed Icelandic road:

Me when I drove on my 50th bumpy, potholed Icelandic road:

In the final afternoon stretch, the swings in the weather became downright comical. It went from blinding snowstorm to blinding sunlight and back to snowstorm in a 15-minute stretch. This is some wacky Neverland shit right here.

I arrived in Hólmavik, my destination for the day; watched the teaser trailer for “The Last Jedi” on my phone while standing in their little supermarket; and found a parking spot for the night overlooking the bay with its large population of penguin-looking ducks. 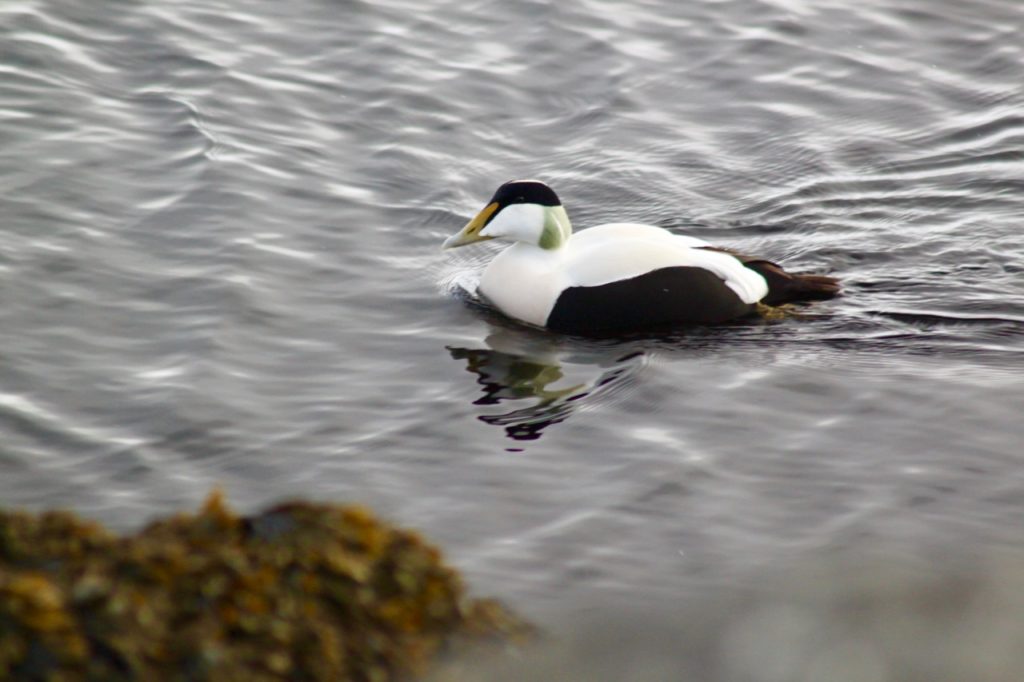 Tomorrow, Saturday, is an unknown quantity. The roads might be clear enough for me to make a loop through the region; or, if the road/weather pattern thus far continues, I might turn back towards Reykjavik and get there a day ahead of schedule.

Hmm, not many pictures to share today. Let me make up for it with a day-before-Easter tribute to the cute little churches of Iceland that I’ve seen in every little town and valley. 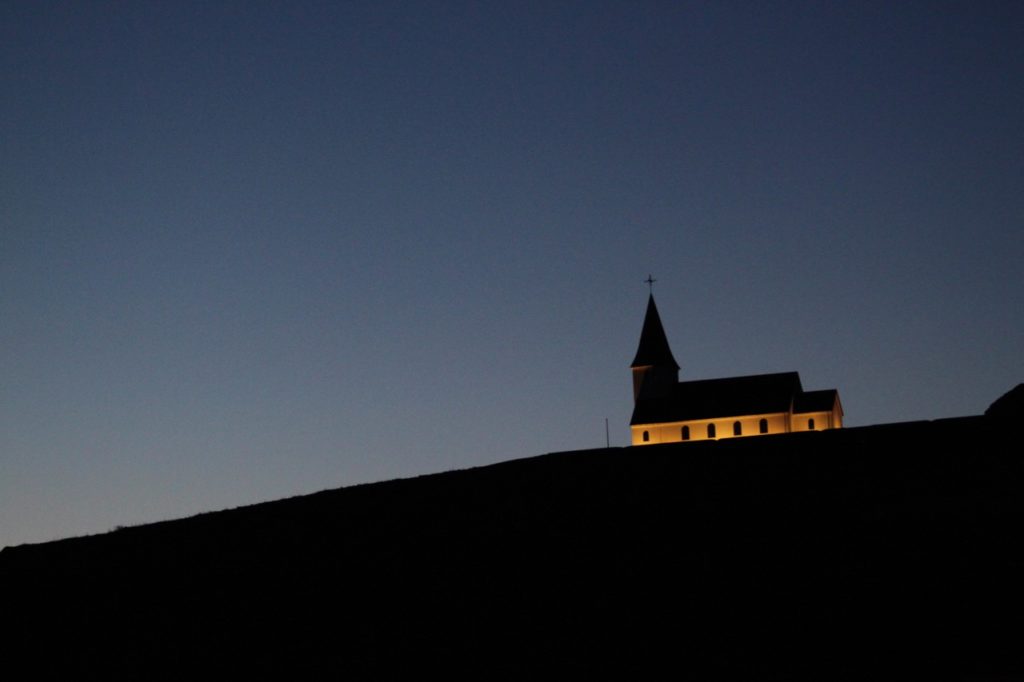 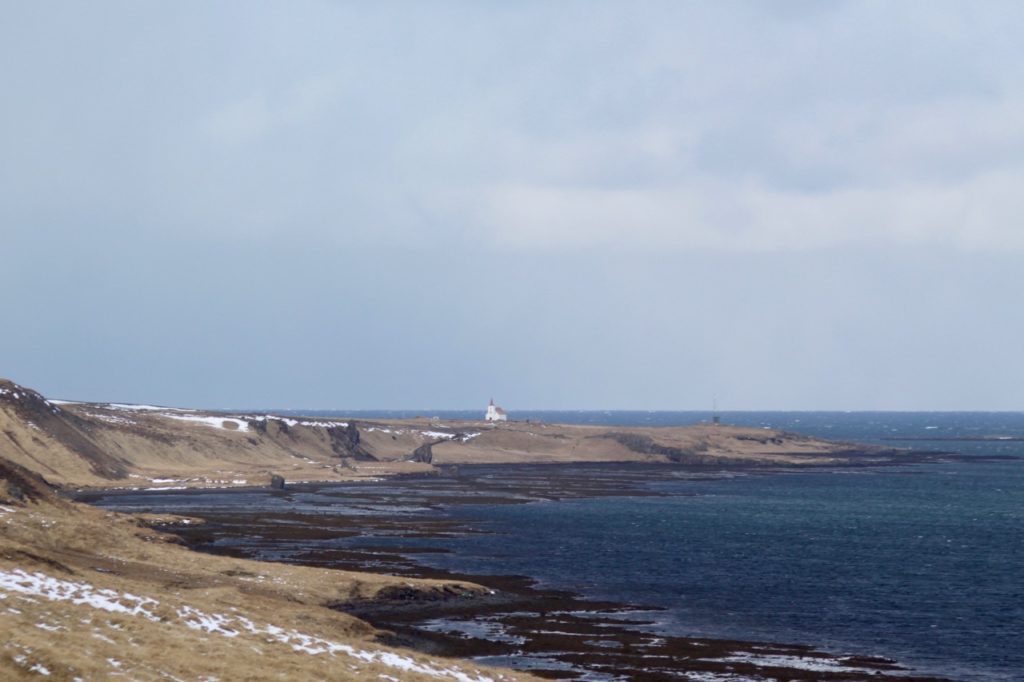 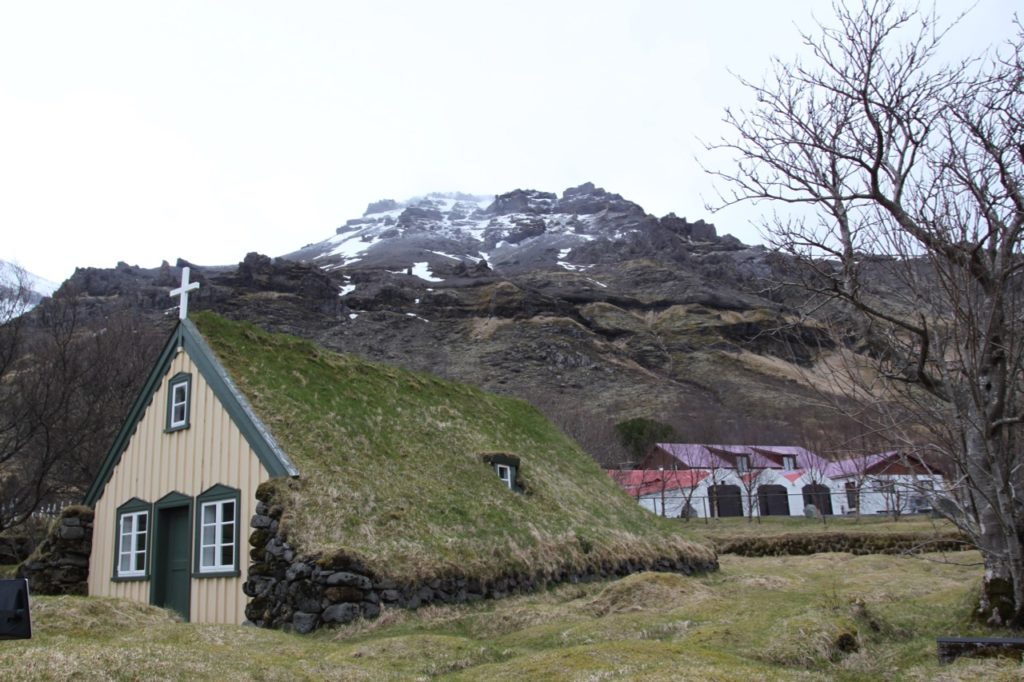 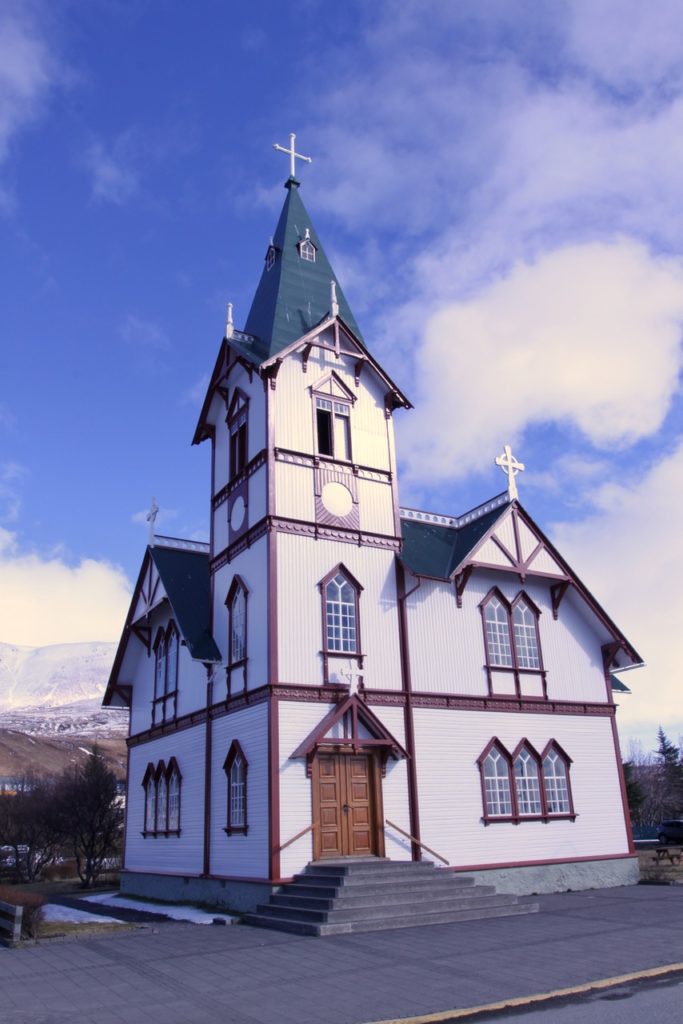 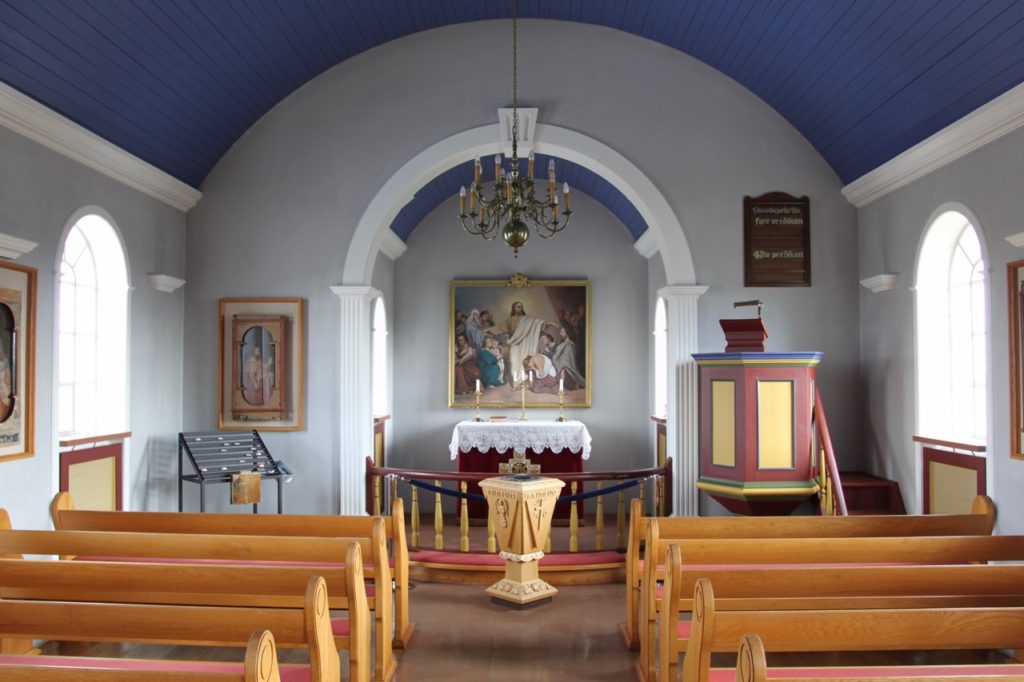 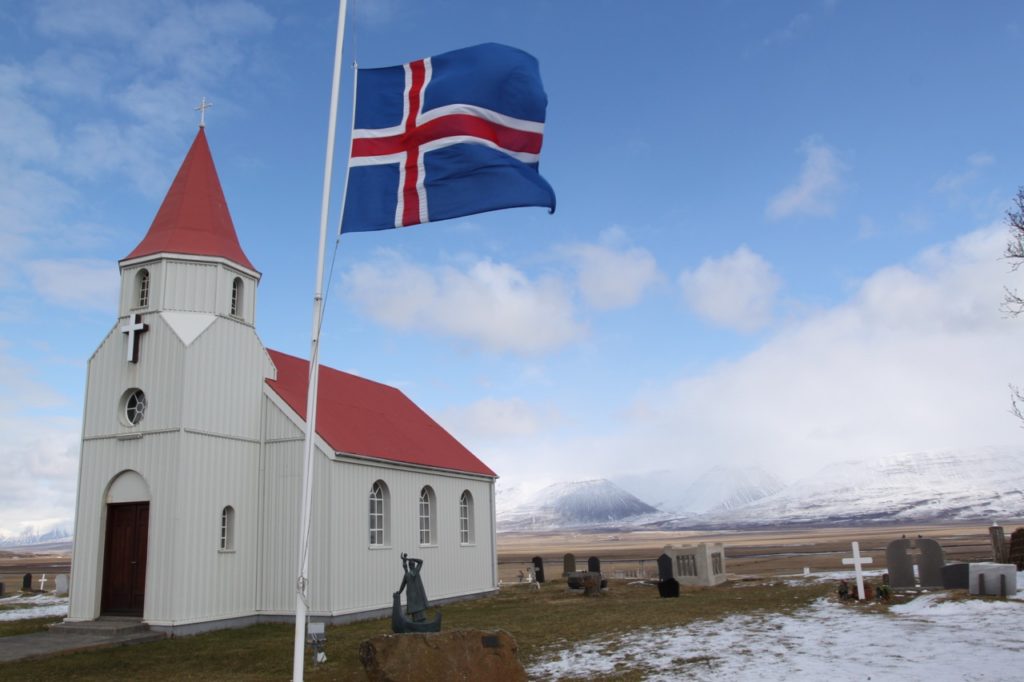 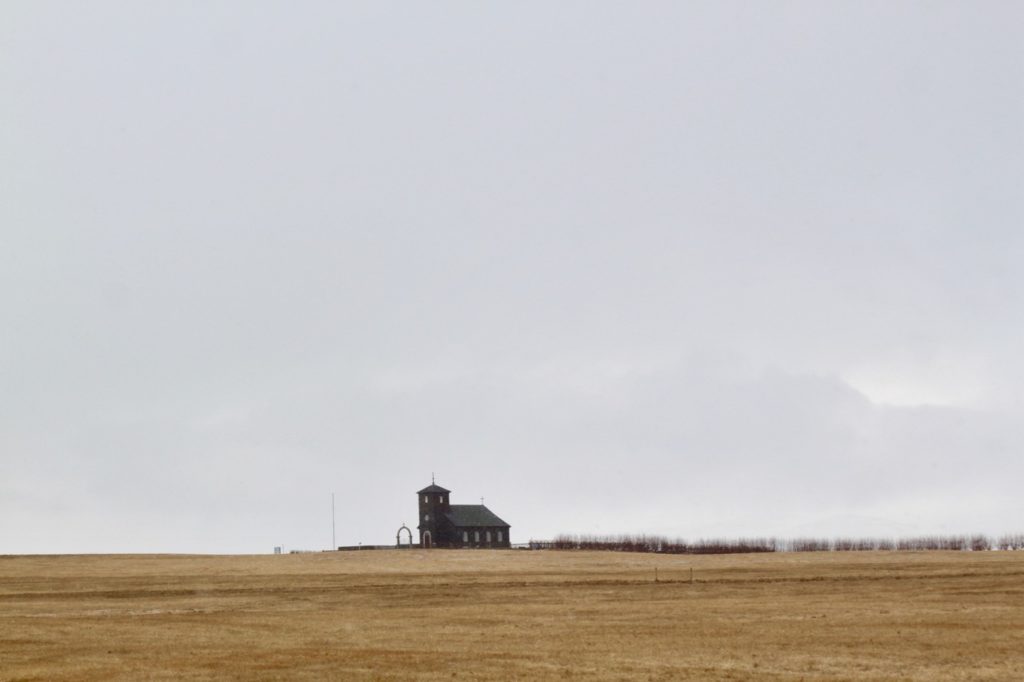