To pick up my camper van on Sunday morning I had to walk to the bus station and take a 45-minute ride back to the airport, only to pick up ANOTHER shuttle and get to the rental agency. But after that and the usual stack of paperwork, I was finally introduced to her.

Now, y’all may know that I always name my cars after female solo artists—Fiona, Tori, Cher, Florence, and so on. And so, uncreative though it may be: everybody, meet Björk. 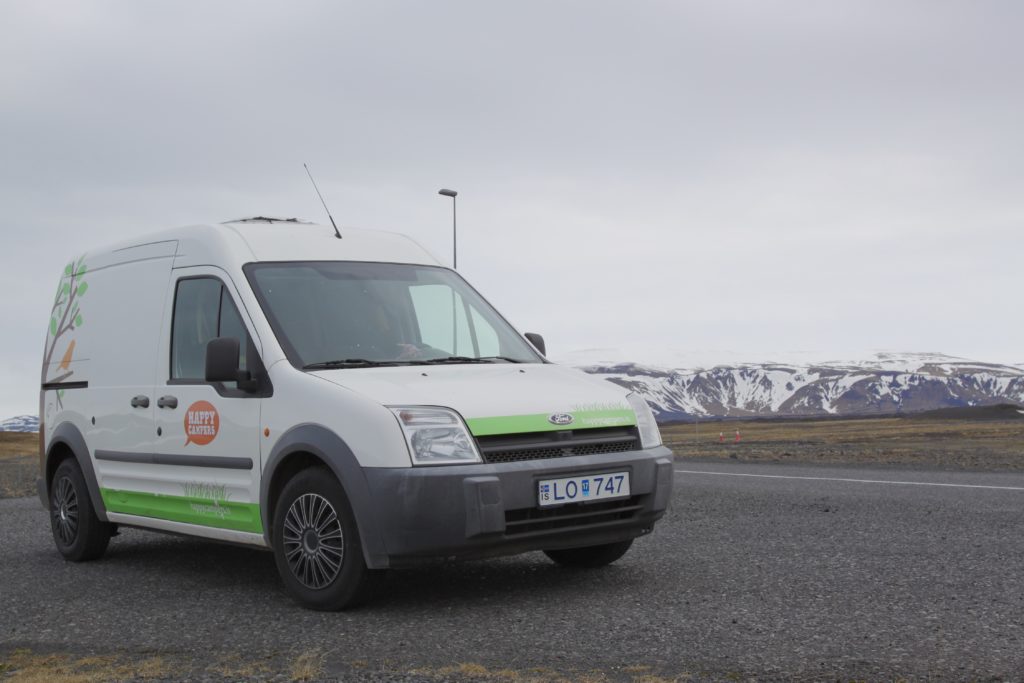 She’s a stick-shift, the sliding door doesn’t always open, the dome light doesn’t work, the bed doesn’t fold flat, and I love her to pieces.

I drove Björk back to the Airbnb, tossed my stuff unceremoniously in the back, and by 11:30 I was headed southeast out of Reykjavik on the Ring Road.

To call this the best weather of the trip so far is an understatement. The sun peeked through broken clouds above; not a stitch of rain. Later in the day it would be downright sunny.

In most places, Iceland consists of very wide, very flat land backing up to incredibly dramatic cliffs and mountains. Off those cliffs fell one stunning waterfall after another. I could have literally stopped for a picture every five minutes. I joined the throngs of tourists1 at some of the major ones, but there were so many others without even have a spot to pull over. It’s an overwhelming experience. 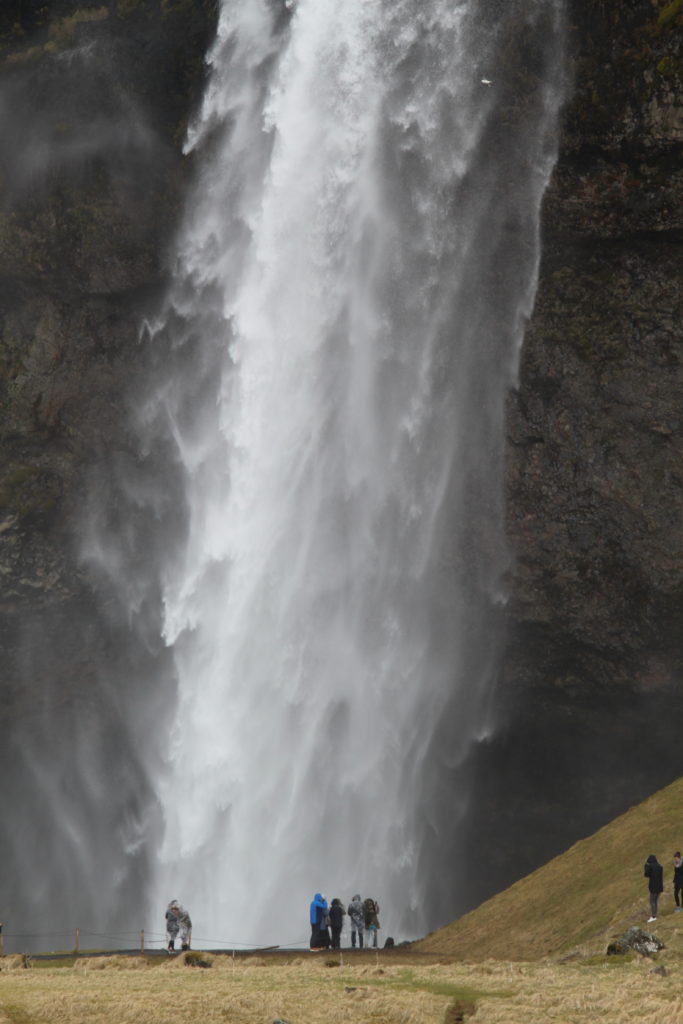 Then I stopped at a grocery store, bought food, and made myself a PB&J for lunch, just to remind myself that mundanity still exists in the world.

My two afternoon activities each felt like some kind of bizarre cold-weather dare that I, for some reason, accepted.

Dare #1 was Seljavallalaug. Say it with me, now: SEL-ya-va-la-lowg. It’s an outdoor thermal pool that’s so far from the road, parking lot, or any other human habitation that only the ant-trail of fellow tourists convinces you you’re not walking randomly into the wilderness. I hiked almost 20 minutes up a narrowing ravine, carrying my swimsuit and towel in a plastic grocery bag. Finally I rounded a bend and saw… a guy’s bare butt. This must be it.

This place is some kind of life-after-people thing. The pool has been open since the 1920s, but only the barest of maintenance has kept it alive. The changing rooms were in ruin, which meant most of us just changed clothes right there in front of God and everyone, freezing wind spanking us the whole time. I quick-changed into my swimsuit and immediately dipped into the pool, discovering to my dismay that (unlike the Secret Lagoon) it’s merely warm, not really hot. Like hour-old-bathwater warm. Yuck.

There was a thin waterfall trickling down the hillside into the pool, so I backed into this little alcove and let the hot water trickle down my back. (“Naturally hot water” still doesn’t quite register as a logical thing in my brain.) There, I was able to relax for a bit. The mountain in front of me was brilliant in the sunlight. Occasional snowflakes drifted downward. It was pretty darn nice.

The real challenge was getting out of the water.

Dare #2 was Sólheimasandur (SOUL-heim-a-sand-ur). This is a beach where a US Army DC-3 famously crash-landed in 1973, and was largely left there to rot. You can hike from the Ring Road to take a look at the rusting plane sitting by itself on the sand.

The catch is that the hike down to the beach is crazy-long, like, almost an hour of brisk walking. Time and space seemed to lose all meaning as I walked on this straight track from the parking lot. The ocean was visible in the distance from the very start, but absolutely refused to grow any closer. The sun set slowly to my right2 and the wind seemed to emanate directly from it, my shadow stretching off to the left was like a wind sock. 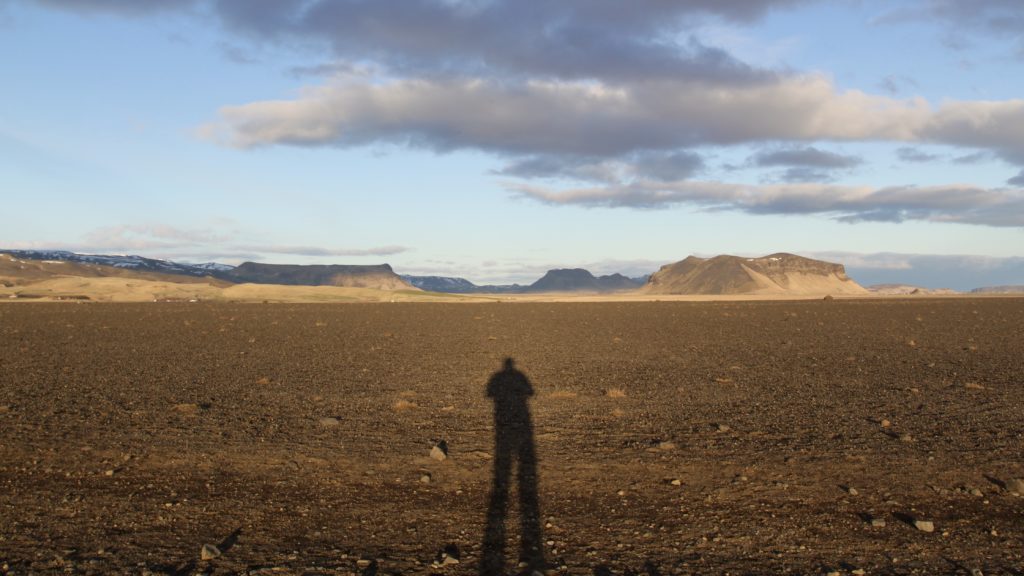 Just when I had lost all hope of ever seeing my family again, the plane finally appeared in the distance. And yes, it is quite strange-looking, though all us tourists hopping around like flies on a carcass take something away from the effect. Still, a neat sight. 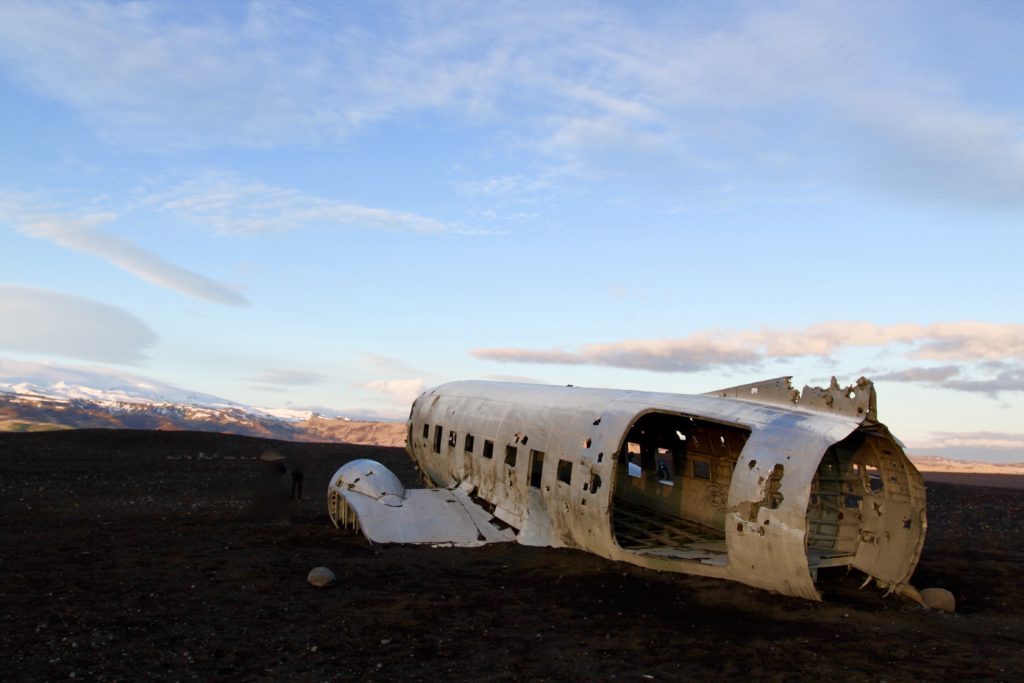 Of course it was almost an hour to walk back, this time directly into the wind. (I’m trying not to bitch about the wind constantly, but it’s pretty impossible to ignore.) I made it back and drove another few kilometers to Vik—finally, a place with a short name!—where I gassed up and parked at the camping area.

I wish I could have captured the moment an hour later, in the back of the camper, after I poured the boiling water into my freeze-dried chicken gumbo, set a timer for 10 minutes, and then just sat there, head back, white LED dome light dimly illuminating the scene. Only my hunger kept me from passing right out as I sat there. My watch told me I had reached almost 700% of my daily exercise goal. HOLY CRAP FREEZE-DRIED GUMBO IS SO GOOD, Y’ALL.3

ICELAND FACT OF THE DAY: There are currently no trains of any type anywhere in Iceland.