My first-ever visit to London1 would have been a whirlwind even without extraneous factors. It was a mere 56 hours between my arrival from Austin on Saturday morning and my departure to Cape Town on Monday afternoon. That’s hardly enough time to visit a couple of museums, take a couple of selfies, and get hit by a bus cause you looked the wrong way while crossing the street.

And yet, there *were* extraneous factors. This was a glorified stopover for me, but by wild coincidence, there were TWO enormous improv events happening in London: the Slapdash International Improv Festival and the 50-hour Hoopla Improv Marathon. This meant I had shows to see and perform in, and a wild number of friends in town. Improv, I just don’t know how to quit you.

I landed at Heathrow and took the tube to my host Phil’s neighborhood, with markets and cafés and double-decker buses and a peculiar number of barber shops. London’s concentrated diversity was everywhere—races, accents, and languages in abundance that’s hard to find outside of New York City.

I dumped the bags and headed back downtown. My first and biggest stop of the day was the British Museum, where 3,000-year-old sarcophagi lay in front of me, nothing but the honor system stopping me from placing my hands where some anonymous stoneworker placed theirs, over a hundred generations ago.

The magnificence of these ancient civilizations persists. Look upon my Works, ye mighty, and despair, the enormous statues instruct the gawking tourists. What of ours will tourists stare at 3,000 years in the future? Given how little stonework we do these days, I figure, not much. 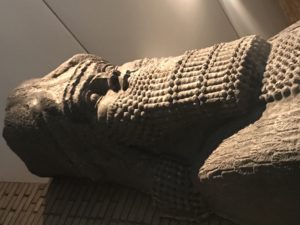 A dedicated gallery displayed large portions of the Parthenon, which I would’ve expected to see when I visited—ya know—the Parthenon. The British Museum’s open dirty secret is how many of its greatest hits are straight-up plunder. One ancient Egyptian obelisk was labeled as a “gift from King George III” and I’m PRETTY SURE HE WAS NOT THE ORIGINAL OWNER, GUYS.2

Without consulting a map—intentionally so; I was happy to wander—I left the museum and walked roughly in the direction I figured the Thames was in. I managed to miss it entirely, but I did stumble upon Trafalgar Square and finally found a bridge at Big Ben. I’d forgotten to switch to my comfy shoes. The blisters were a-comin’.

After strolling along the southern waterfront (and discovering I was in the wrong neighborhood entirely), I finally got to the Slapdash venue, where I found an astonishing number of improv friends both expected and unexpected. It was like a family reunion. The highlight of the night’s shows was Decibel, a silent-improv trio featuring my friend Jacintha from Finland.

I stayed at the afterparty way too late, then doubled down by cabbing over to the Hoopla Theater, where they were midway through their 50-hour marathon. I watched improv to the point of true delirium (improvised Rick and Morty?!) before finally heading back to Phil’s place for a few hours of sleep. Sunday morning we headed right back to the theater; it was time for the antepenultimate3 History Under the Influence.

Jet lag + a few gin-and-Sprites make Kevin a silly boy. My cast performed wonderfully as we documented the Russian Revolution, the dissolution of the monasteries, and Margaret Thatcher’s rise to power. (“Did you guys see Ratatouille? It was like that, with an evil butterfly.”)

Thankfully, and as per plan, I hadn’t gotten so drunk as to waste the rest of my day. I took a 20-minute cat nap in the pub downstairs from the theater, then walked 10 minutes to the Tate Modern, the second of my two big museum visits.

Now, look, real talk: I’m not a super modern-art guy. But I only rolled my eyes a few times. There was some great great stuff, including the requisite Dalis and Pollocks and Rothkos, and entirely new discoveries. 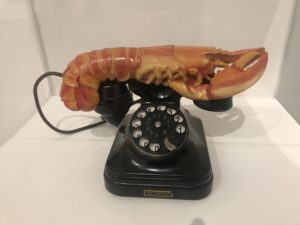 Next I walked on the Millennium Bridge across the Thames.4 Looming in front of me was St. Paul’s, the overpoweringly enormous cathedral finished in 1720. I arrived during the informal changing of the guard, as Sunday-afternoon parishioners filed out and Sunday-afternoon tourists filed in. I examined crypts and sarcophagi and statues that were ostentatious AF; the bus-sized tribute to Lord Nelson is truly ridiculous. I then sat for a few minutes under the tremendous dome, neck craned back, staring at the frescoes and finding fascinating details everywhere.

Here’s a fun historic anecdote: on September 10, 1940, a German bomb crashed through the roof of St. Paul’s and failed to detonate. The bomb squad quickly conducted what was surely the highest-stakes defusing job of their careers, then hauled the bomb into the countryside and exploded it, creating a 100-foot crater. That’s how close we were to having lost this thing. 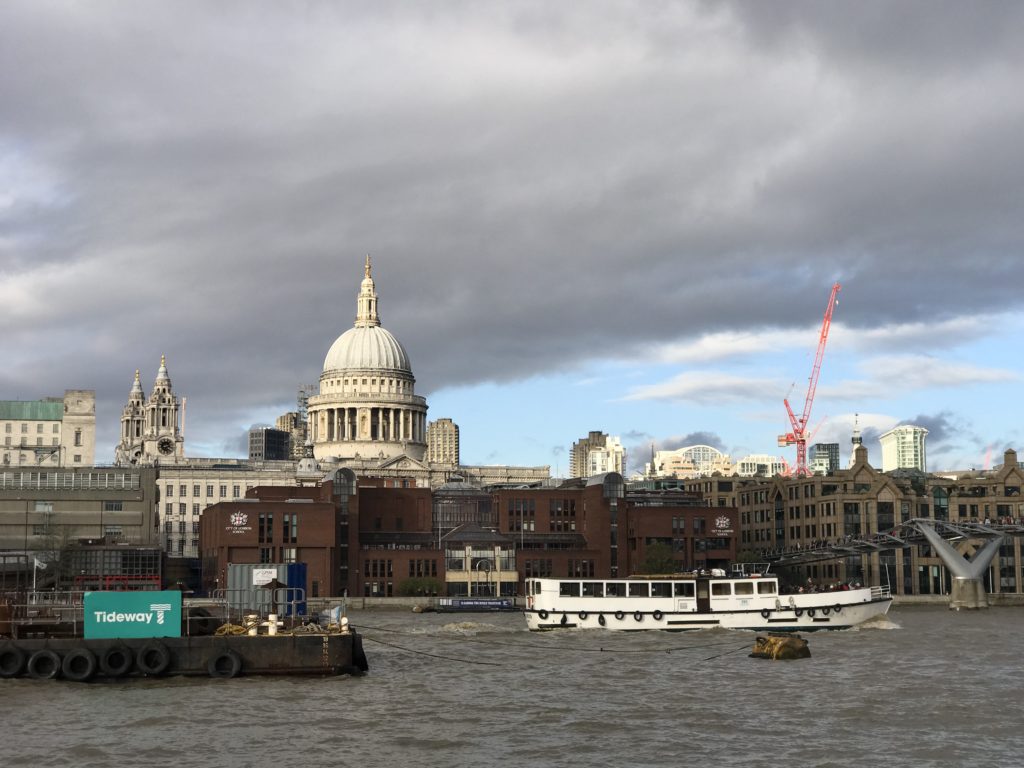 I took a couple of hours to rest my foots at Phil’s place and watch Phil’s Netflix, before finding dinner at the nearby kabob stank and making one last improv pilgrimage to the final hour of the Hoopla marathon. The night ended with drinks and stories at Phil’s kitchen table. I was in bed at something like a reasonable hour.

Off I go in a couple of hours to Heathrow, then to Cape Town, by way of Dubai. (Go check out a globe if you don’t realize how out of the way that is. Including this stop in London, my route from Texas to South Africa would make Indiana Jones scratch his head.)